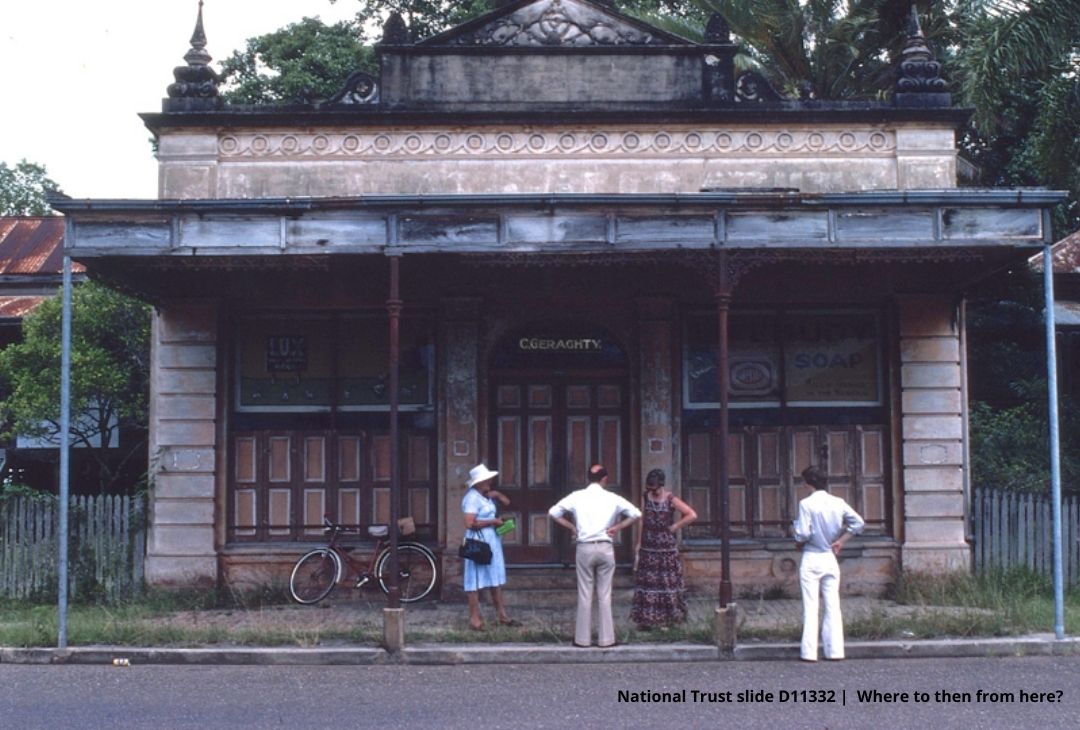 From the Archives: Showing Cause

From the Archives: Showing Cause

Early in 1974, the Brennan and Geraghty’s store buildings were considered to be ‘so far dilapidated as to be unfit for use…’. According to the Trust’s archival files for that year, the future for the store complex did not necessarily look rosy.

With the death in 1973 of George Geraghty, the future of the century old Maryborough store, along with its accompanying residence and cottage, rested in the hands of a group of people determined to save it—local Maryborough residents and the National Trust.

Timing is everything. The inception of the Australian Heritage Commission in June 1975 led to the creation of a Register of the National Estate. Commonwealth funding became available via a grant process, funding which allowed the National Trust in Queensland to make an offer of £25,000, subsequently agreed to, for the site. With this purchase offer pending, the then Maryborough City Council agreed to stay its hand on the existing Show Cause notice as to why the three buildings should not be demolished.

Given this reprieve, much needed to be done. Architect Geoffrey Pie prepared a list. The residence, known as Uskerty, was essentially sound, though it needed levelling and restumping. The cottage needed similar work, though on a smaller scale. The fig trees at the rear were causing problems with the sewerage pipes and a solution needed to be found. The store needed urgent attention for safety reasons, in regard to the archaeological removal of its remaining contents and in respect to structural work that would depend on an engineering assessment.

Delays challenged the fine equilibrium being sought between ensuring that the risk of further damage was reduced, and that the complex legal arrangements for obtaining title for a collection of buildings owned by members of the Geraghty family, all now deceased, were resolved. As investigations into the store’s history continued, its overall importance and rarity as an early and intact regional store, with accompanying records, became more than apparent.

Balancing out how to preserve the collection and keep the grass cut and the fig trees from causing more problems, while yet planning for restoration of the buildings, evolved with care. Thankfully, the early Trust considered the retention of the offending fig trees so important that, with local Council approval, it funded a concrete pipe solution to counter the invasion of tree roots.

Revealing the full heritage significance of the Brennan & Geraghty’s Store complex would take decades. The archive files record that the residence and the cottage were restored first, so that their residential tenants could provide some income and a presence to deter vandals. Following an archaeological investigation that found coins, buttons and evidence of early ground levels, along with a bottle used to chock up one of the bearers, early in 1990 conservation work commenced on the store. On 3 November 1990 the Governor of Queensland, Sir Walter Campbell, declared Brennan and Geraghty’s Store Museum open. Until its closure due to the coronavirus restrictions, the Museum Store has shared its retail story with all who visited.

How important then was it to save the site from demolition in 1974? As well as being recorded in the now-archived Register of the National Estate, the Brennan & Geraghty’s Store complex is entered in the Register of the National Trust in Queensland, the Local Heritage Register of Fraser Coast Regional Council and the Queensland Heritage Register, each listings an acknowledgement of its heritage significance to Queensland, if not Australia. How easily it could have been otherwise.